Vianova has recently begun providing a road safety score to clients in certain markets. Here you can learn about the data that goes into the score, how to use the layer, and how to interpret the results.

Vianova's Road Safety ranks are calculated based on several component features, each featuring a specific location, represented by a latitude and longitude coordinate. Data primarily comes from three distinct sources: 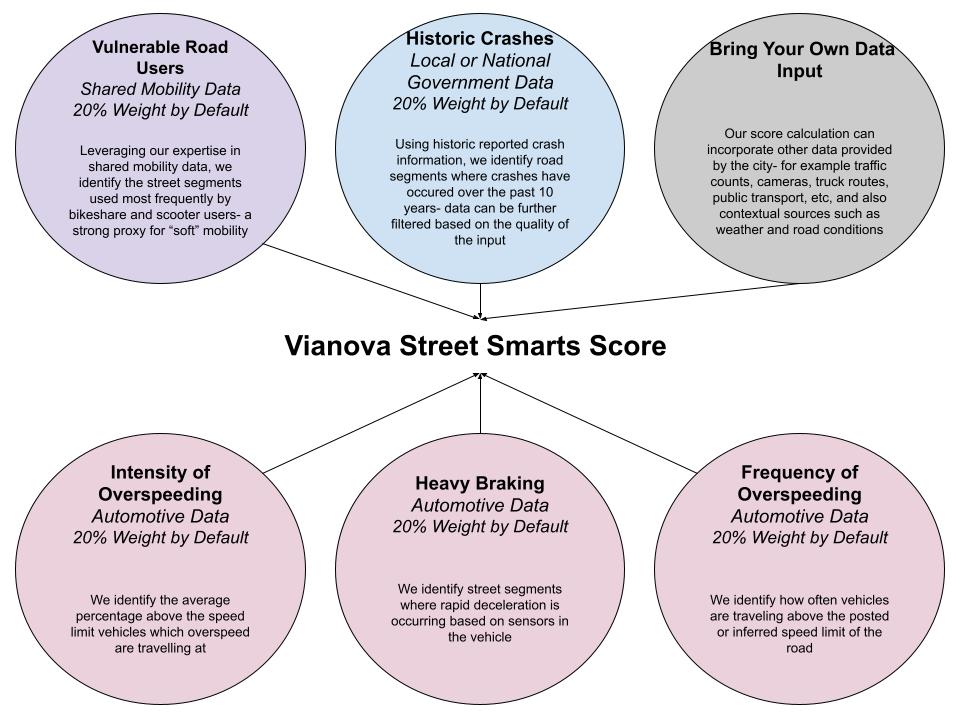 Vianova uses a proprietary algorithm to assign, or "snap" each of these location points to the most appropriate road segment. We identify roads using Open Street Map , a crowd-sourced but highly reliable data set of the world's roads, including information such as the name, the posted speed limit, and the type of road. In order to ensure reliable results, Vianova slices roads into approximately 100m units for easy comparison, though some particular segments may be shorter or longer. Vianova also applies certain business rules to the data to remove outliers (for example, removing bicycle trips assigned to motorway road segments).

Data which is "counted" (such as collisions) are "normalized" for the total number of observations, and the length of the road segment. In other words, the objective is to assess risk adjusted so that long road segments or busy road segments are not disproportionately represented.

Errors may occur with such a large data set, but the vast majority of observations will be assigned to the correct road segment. The most frequent errors to occur include incorrect attributions of data points, and Vianova works to ensure that these are minimized.

As we improve the feature, we will have the ability to add additional components to the ranking, and to apply different filtering of the data based on certain characteristics (such as weather, time of day, or road condition).

Vianova uses a conventional ranking system based on the weights of the inputs. In other words, a road with rank #1 is identified as the single most dangerous road segment in the city, with the greatest average rank across the inputs. Each individual metric can also be ranked- for example, a user can sort roads to see the #1 ranked road for collisions, or the #1 ranked road for heavy braking. 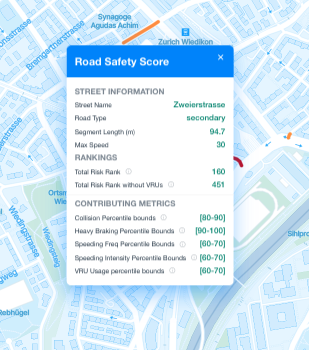 When looking at the overall ranking, a user can also view the percentile bands for each metric. A simple way of thinking about percentiles is "this observation is greater than between X and Y percent of all of the observations", where X and Y = the percentile bands. By observing percentile bands, a user can understand which of the component metrics were likely the greatest contributors to a particular rank. For example, in the road segment above, Heavy Braking is the component with the greatest influence on the overall rank, as the road had more Heavy Braking (normalized for observations) than between 90-100% of all observations. The other components were also reasonably risky, with all of them ranking above 60% of observations.

The Road Safety data can be visualized using the "Layer" feature on your Cityscope Platform.

By selecting the "edit" feature (the gear icon at the bottom of the list), you have the ability to customize your layer, for example: 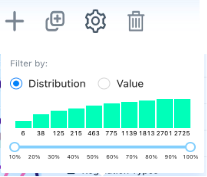 For more information, view the page on importing data as a static layer.

What does a "rank" mean?

Predicting collisions is an extremely imperfect science. There are many factors that contribute to a collision which are difficult to quantify- the conditions of the road, the weather, the attentiveness of the parties on the road. But by laying separate data sets on top of one another, we can do our best to identify the potential of compound risks on particular street segments.

The risks provided are meant to give cities, fleet operators, and others information to make better decisions. A rank identifies the habitual presence of the ingredients of a potential collision- heavy braking, dangerous speeds, vulnerable road users. It also accounts for the history of collisions on the street- a strong but not deterministic factor that there may be additional collisions. A street segment with a high rank (a low number) is one where the ingredients are present in high doses.

We leave it in the hands of the transportation professionals using this tool to identify the most appropriate intervention for these corridors- whether it's an engineering approach, an enforcement campaign, or educational outreach. Over time, we will be able to update the risk score with fresh information, in order to determine if interventions have been successful at reducing risks.